Edward M. Kennedy Community Health Center was founded as the Great Brook Valley Health Center, Inc. (GBVHC) in 1972 by seven women who were seeking better access to health care for their families. These women lived in the largest public housing complex in Worcester, Massachusetts and relied on the hospital emergency room for care. As a result, they did not have access to regular, preventive, and primary care services for their families. To change the paradigm, these pioneers founded a corporation, obtained space from the Worcester Housing Authority, and negotiated for a nurse practitioner to come to the Valley.

Over time the Health Center grew to meet the increasing demand for medical care from residents of the Great Brook Valley neighborhood and the city of Worcester in general. As needs were identified, staff was hired, funding obtained, new services initiated and new sites launched to better serve the diverse population of Central Massachusetts. This growth included the construction of a new health care facility in 1992, located across the street from the Great Brook Valley public housing complex at 19 Tacoma Street. This flagship medical facility grew exponentially with renovations and expansions to bring behavioral health, dental services, social services, vision services, urgent care and waiting rooms to the site.

In 2007, Kennedy Community Health purchased 631 Lincoln Street to house its community programs, nurse triage and eventually our call center. This facility was renovated in 2015 to accommodate a growing optometry practice in collaboration with MCPHS University. The organization also purchased and renovated its first stand-alone dental site in Clinton in 2000.

Beyond its roots in Central Massachusetts and in response to a concerted community effort to address the lack of access to primary medical care for low income and uninsured individuals and families in MetroWest, the Health Center opened a new medical center in Framingham in 2004. This medical facility began in a storefront at 19 Concord Street with only four exam rooms and within two years was bursting at the seams.  In 2006 and 2007, Kennedy Community Health leased two additional storefronts: one at 72 Union Street for medical services and the other at 32 Concord Street to provide dental care. In 2012, Kennedy Community Health consolidated its two smaller medical sites with the opening of a brand new medical facility with 14 exam rooms, 3 clinical offices and ample administrative and clinical support staff offices at 354 Waverly Street in Framingham. The Framingham location now houses clinical, dental, optometry, and pharmacy services.

Once again initiated by a community coalition to address the lack of primary care for uninsured and low-income individuals, Kennedy Community Health renovated a 5,000 square-foot site to house medical services in Milford at 42 Cape Ave. Since its opening in 2014, the site has seen tremendous growth and has received significant community support. Sprinkled throughout this history, Kennedy Community Health has also opened up six School-based Health Centers, five in Worcester and one in Framingham.

In 2010, through a comprehensive strategic planning process, Great Brook Valley Health Center was renamed the Edward M. Kennedy Community Health Center after the late Senator who is considered by many to be the father of community health centers. Today, Kennedy Community Health serves almost 29,000 patients a year throughout 90 communities. It supports three medical facilities, two optometry sties, two dental practices and six school-based health centers sites. A federally qualified community health center, Kennedy Community Health is a state certified minority enterprise, accredited by the Joint Commission. It was successful in Bureau of Primary Health Care reviews and has been certified as a NCQA Patient Centered Medical Home (PCMH). 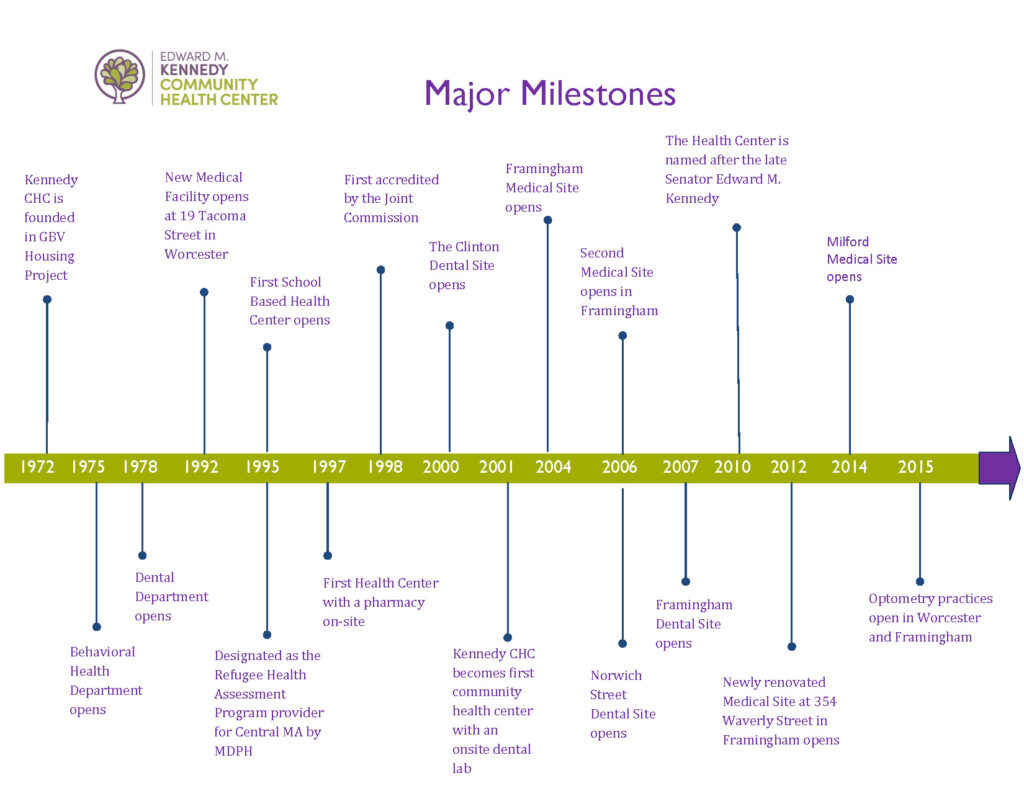